Varanasi (formerly Benaras) is one of the oldest living cities in the world. The dark winding lanes, an ensemble of mystic Hindu temples and shrines, the Ghats serving as a culmination of life and death and a city that presents a unique combination of metaphysical and supernatural divinity. I have been frequenting Varanasi owing to work. And the city never ceases to fascinate me with its distinctive shades of characteristics.

We reviewed this hotel on TripAdvisor. Here’s the link to the review page. 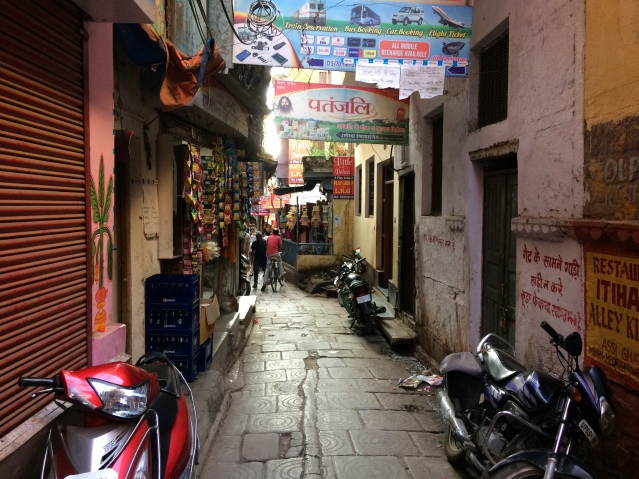 As you step out of Railway station premises, the utter commotion, dusty roads and absolute ignorance of traffic rules literally boggle your mind. And then the Tempo takes you on a freaky joyride through really bumpy and really narrow lanes with houses on either side. The lanes are so narrow that an inch of driving miscalculation and the tempo would almost barge into someone’s sitting room. 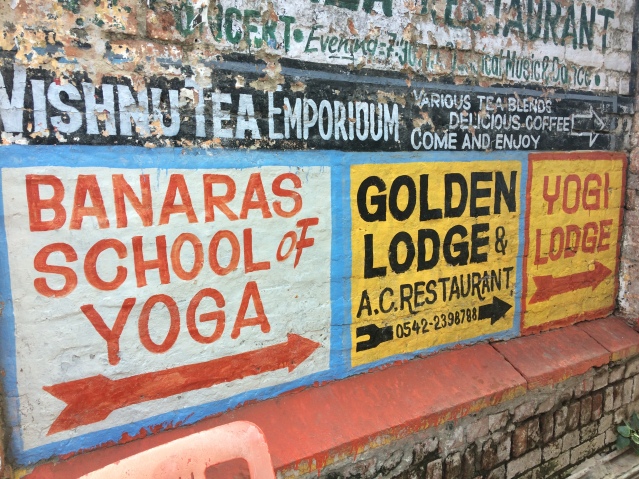 The Unceasing Orchestra of Life and Death

As you gradually approach the Ghats, one experiences a dramatic contrast. The noisy city chaos mellows down to an eerie silence. The century-old palatial structures, lofty fortresses, exquisite temples and shrines dating back to 1700 A.D, outlining the Ghats. The structural array of masonry platform, the steep steps, and wide platforms offer the perfect landscape for a diverse palate of tourists, devotees, Yogis, Babas and locals bathing, cleaning or offering prayers along the riverfront. While some are seen capturing the good times in endless selfies, you also witness many wretched souls mourning the death, loss, and cremation of their loved ones. The unceasing orchestra of life and death is further personified by the ringing of temple bells and chanting of mantras. The air heavy with flowery fragrance, incense, smoke from burning wood and flesh. The endless Ghats has been a silent witness to the eternal circle of life. 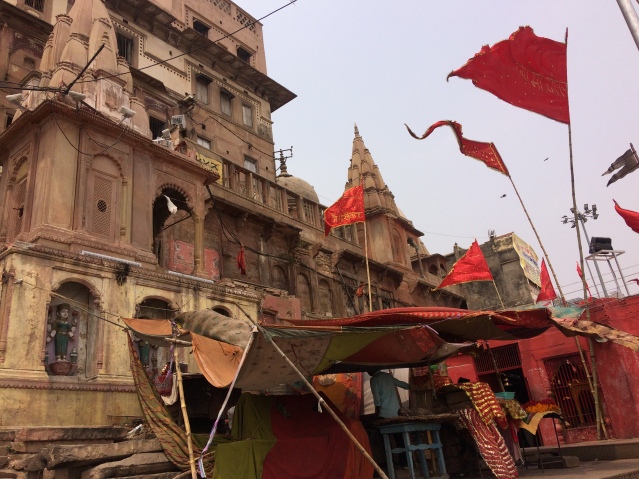 I am here to write about a quaint and cozy guesthouse/ hotel tucked far within the winding Varanasi lanes leading to the Dashashwamedh Ghat – one of the main Ghats in Varanasi. Ganapati Guest House stands tall right on the banks of the Ganges. Most of the riverfront hotels at Varanasi have been built within renovated and customized portions of the majestic fortresses and palaces built during the reigns of the Maratha Empire around 1700 A.D.

Ganapati isn’t a corporate business hotel. It doesn’t offer you the modernity that one might expect. However, what Ganapati has in abundance is historical spectacles, strong cultural aesthetics and an awesome view of the Ganges. 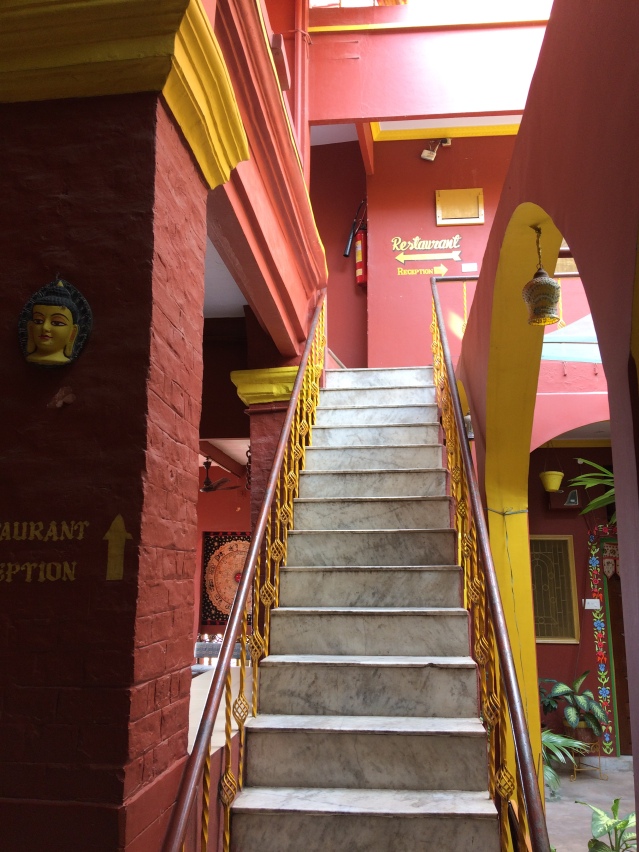 The stairs leading to the Cafe and terrace.

Air-Condition and a Commode

I was a solo business traveler and wasn’t in a mood to squander top dollars on hotel rooms. My priorities are simple – good food and a safe place. The very basic and quaint budget rooms on the ground floor (INR 1800 Per Night – EP Plan) adjoining a cozy courtyard was just fine. The only touch of luxury in the room was an Air-Condition and a commode (to be very specific). No land phones, no television, no fancy furniture, and almost no Wi-Fi. The rooms with higher tariffs might be having those. That’s okay though. The last thing I wanted to do was watch silly television sops sitting in a Varanasi hotel. 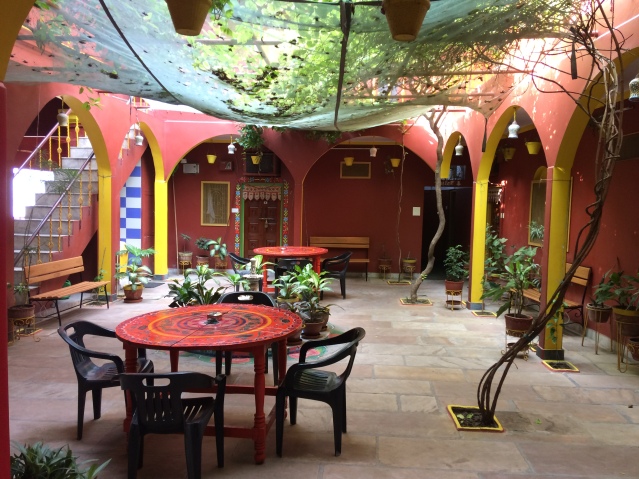 The courtyard during daytime. 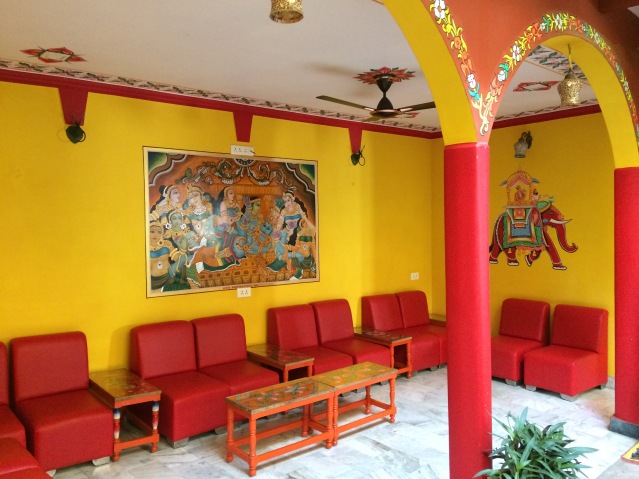 A Touch of Ancient Architectural Elegance

While the entire hotel premises dons a splash of vibrant colors, the doors knobs, latches, panes and everything else had a touch of ancient architectural elegance. You need to climb up and down some interesting arrangements of steep stairs to access the rooftop restaurant, a small terrace or the reception area. Probably because the management didn’t redesign the existent masonry structure. Ganapati has a lot of open space and fresh air, which most centrally air-conditioned city hotels severely lack. 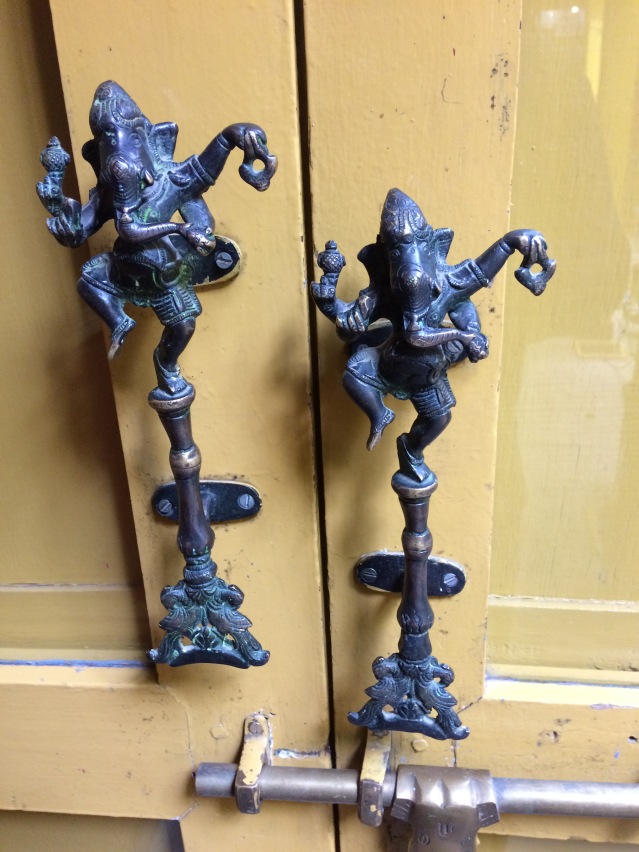 The old-world door knobs and latches. No electronic locks. 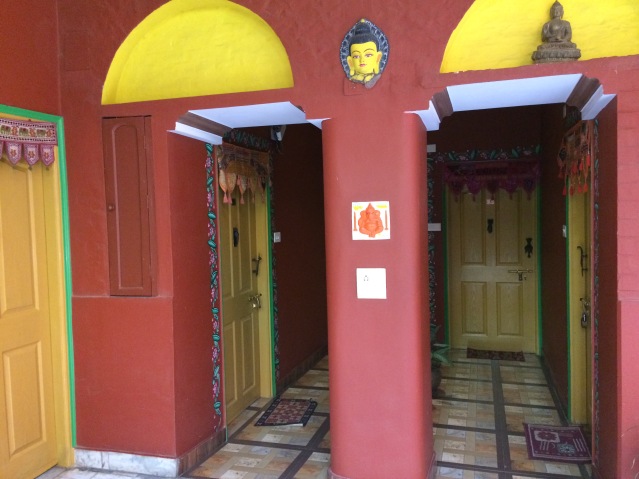 Entrance to the deluxe category rooms.

The rooftop restaurant needs a special mention. To start with, it offers a majestic view of the Ganges. Of course, the scorching summer heat might be a deterrent during the daytime, but this open rooftop restaurant is absolutely magical during the evening. An uncanny serenity and eerie calmness blanket Ganapati soon after dusk. For obvious reasons, the restaurant seems quite popular among in-house guests and some visiting tourists too. The food is absolutely delicious. You don’t get to see too many Bars and liquor shops in Varanasi.  And Ganapati serves you chilled Beer. 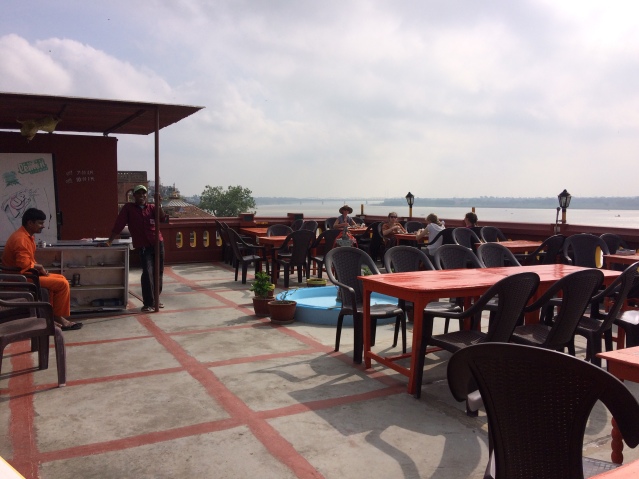 The rooftop cafe with a breathtaking view. This looks significantly more beautiful at night. 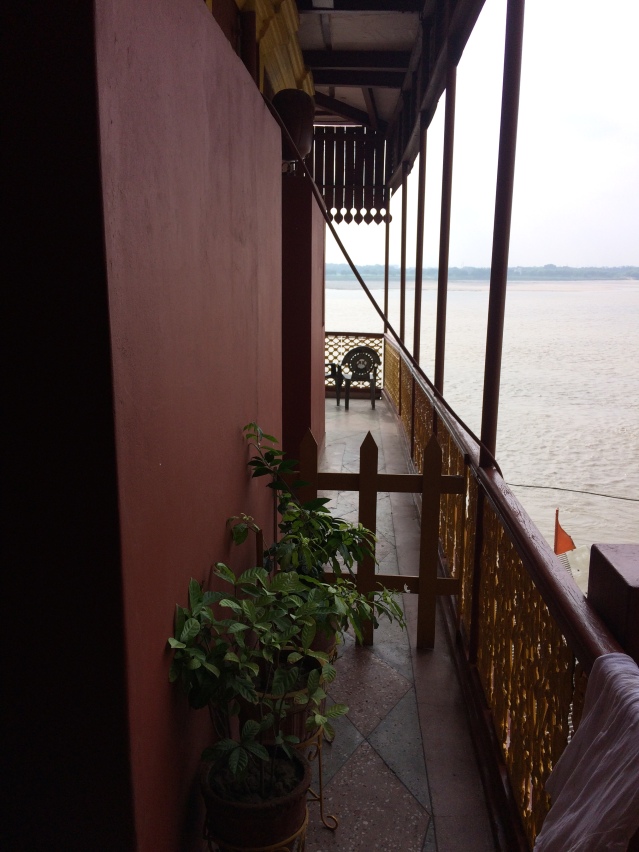 The deluxe rooms with private balconies overseeing the Ganges.

The refreshing breeze, those blinking lights from motorboats far away in the river, humming distant sound of Indian classical music, temple bells, Vedic chants from the adjoining Dashashwamedh Ghat creates an enduring enigma and mystic charm.  The overall ambiance is perfect for folks looking for some “Alone Time” far from the bustles of the world. Drink your Beer, light up a cigarette and stare at the dark infinity. 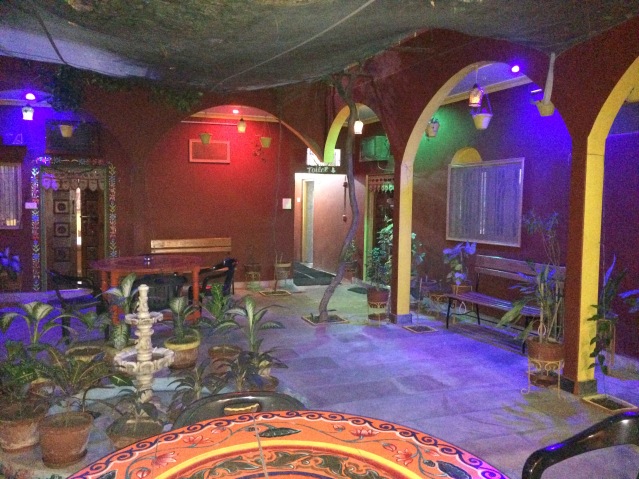 The courtyard jazzed up at evening. 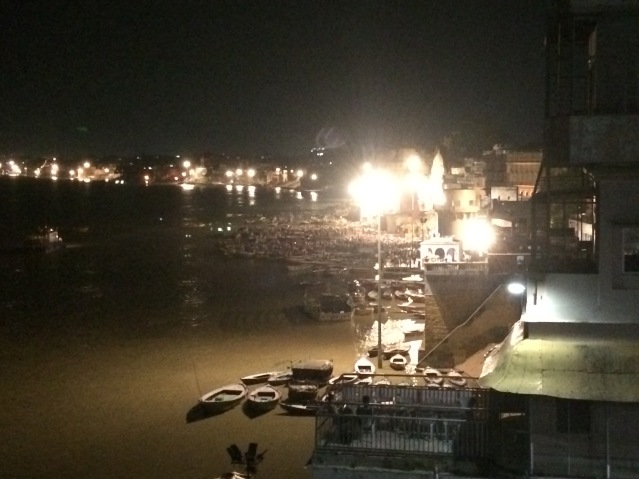 Unfortunately, I don’t carry those high-end photography gears. These were shot from my pocket-friendly iPhone.

The food, as I mentioned is fabulous. Though most of Varanasi is strictly vegetarian, you do get Eggs in most hotels/restaurants. The rooftop cafe at Ganapati features a wide choice of cuisines. From the traditional Indian Curry to Continental and French variants. All of it delicious and perfect. I particularly restraint myself from experimenting with food while on solo trips. So the Special Veg meal Thali (platter) does perfect justice to my craving for Indian food. Varanasi has a vast variety of French and Italian cafes serving everything from Lasagne to Apple Pies and French Pastries. This is mostly due to the astounding number of domestic/international tourists that visit Varanasi round the year. 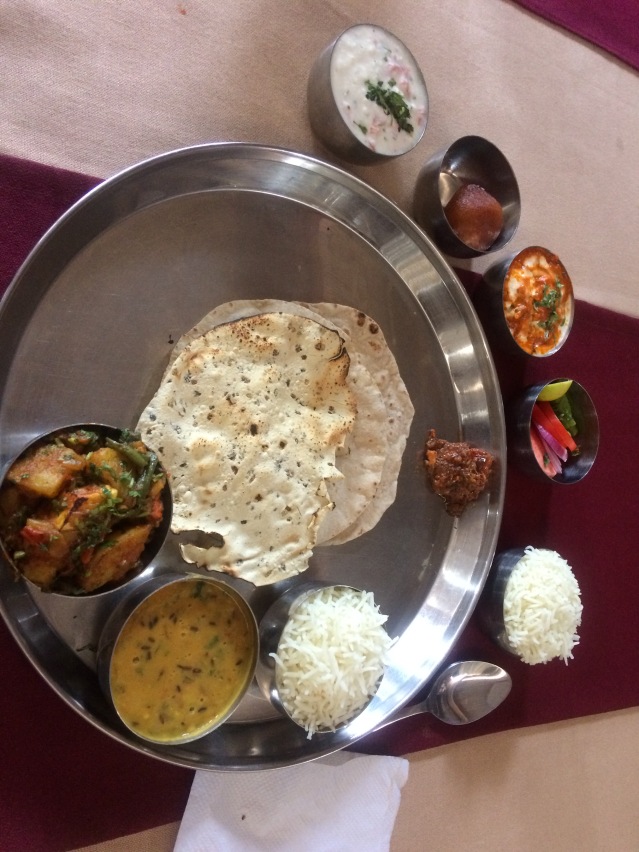 The Wi-Fi is Practically Nonexistent

Contrary to what the hotel management asserts, you won’t get an iota of Wi-Fi signal sitting right at the reception. Though you can see (or stare) at the Wi-Fi router hanging lifelessly from a corner of the wall. And the constipated phone network you get within the premises makes it utterly impossible to have a decent telephonic conversation either. Probably because of the impenetrable thick walls, a typical characteristic of old monuments and palaces. 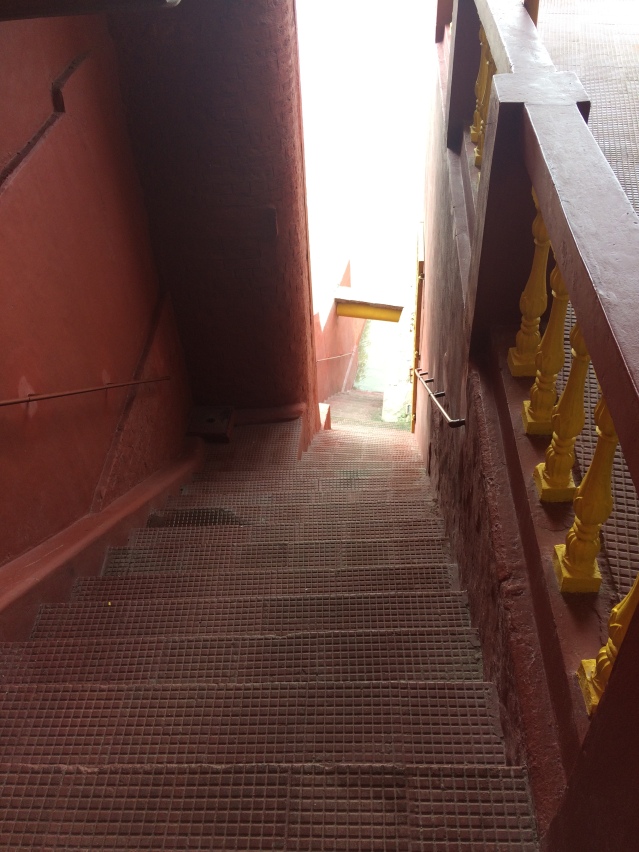 A private stairway leading straight to the Ganges. 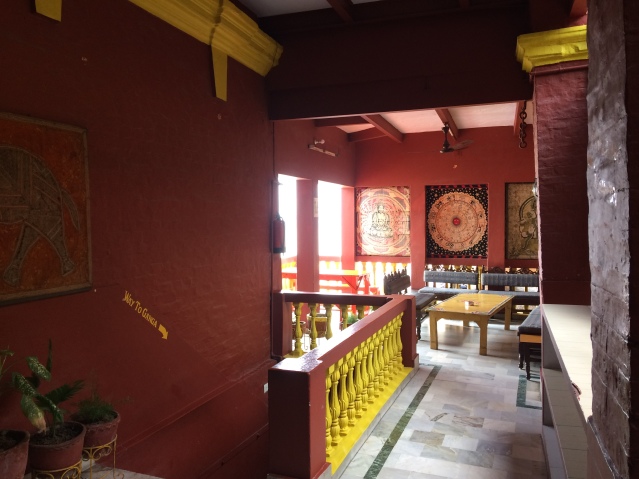 Overall, Ganapati guesthouse has a unique cocktail of old-world charm and every element that comprises a leisurely stay. I stayed at Ganapati during my first visit to Varanasi. My choice of hotel was mostly random and largely influenced by online reviews. Luckily Ganapati was a great selection. 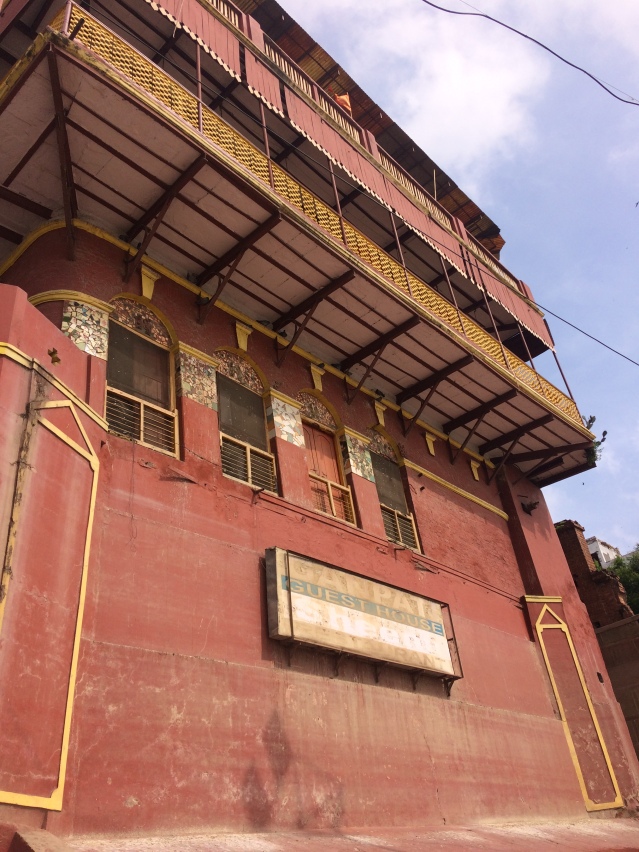 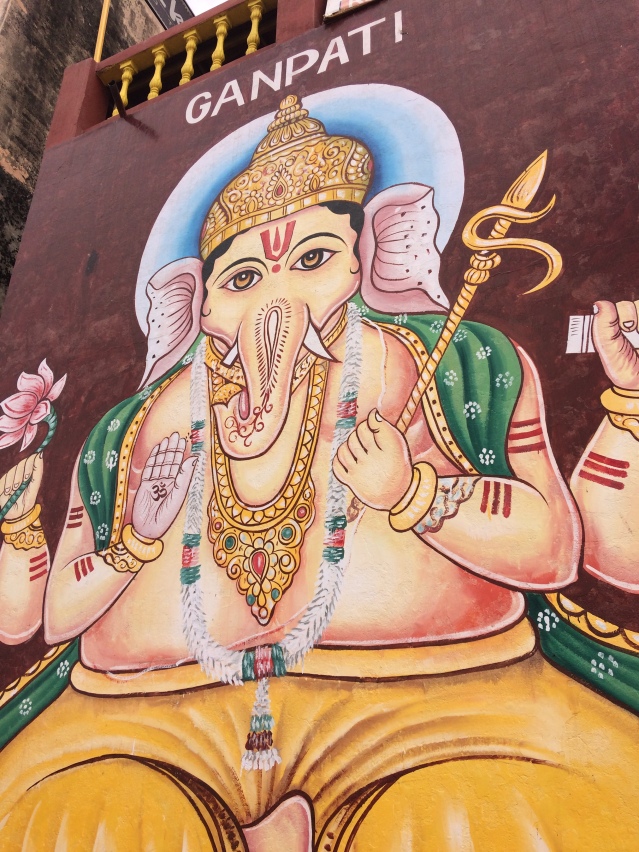